One of the largest and most-respected Elder Scrolls community websites online, the Imperial Library has been a home for Elder Scrolls fans for over 20 years. Learn about this amazing fan-managed resource in our latest Community Spotlight!

For those who have never heard of it before, what can Elder Scrolls fans find on the Imperial Library?

The Library contains any and all information related to the lore of the Elder Scrolls. This includes in-game books and dialog, special collections like the Antiquities texts and Larceny item descriptions, as well as out of game materials like maps, interviews, archives of website content, and developer statements. Unless it's a stat or a level walk-through, chances are we aim to host it.

Now that it’s over 20 years old, tell us about how the site got its start and how it grew into what it is today.

The Imperial Library began as Xanathar's Library all the way back in 1998, and originally hosted both Elder Scrolls and Dragonlance content. The website was renamed and rebranded in 2002 to focus exclusively on TES, and we've been at it ever since. You can read more about it in our 20th anniversary retrospective. 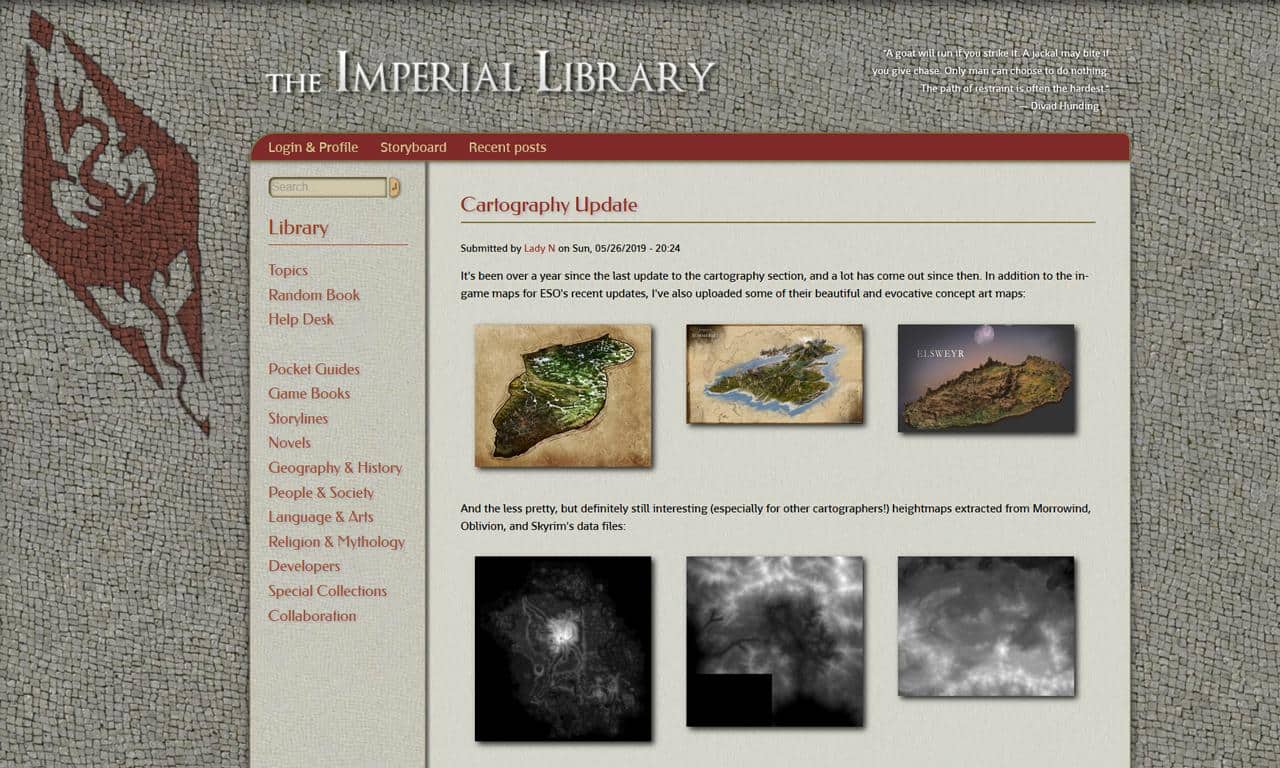 How often is the library maintained and how is it updated?

Big updates coincide with new ESO content releases or special Elder Scrolls events, like Oblivion's 15th anniversary, though we do lots of smaller additions (like backing up Meet the Character articles or developer interviews) throughout the year. Besides that, we tend to push new section updates as time permits. The Library is built on a Drupal framework, so the tech is easy. Just a matter of finding the time.

ESO is a huge, ever-growing game. Is it a challenge to keep the site up to date with each new release?

What kind of players tend to visit the Imperial Library?

We tend to get mostly roleplayers or people who want to get more details on the world of Tamriel and ideas for how to build their character. There's also always an uptick in activity when new content is announced as people theorize what it could be all about. ESO loves to include old lore and references out of game content, and TIL is a good place to look that up! 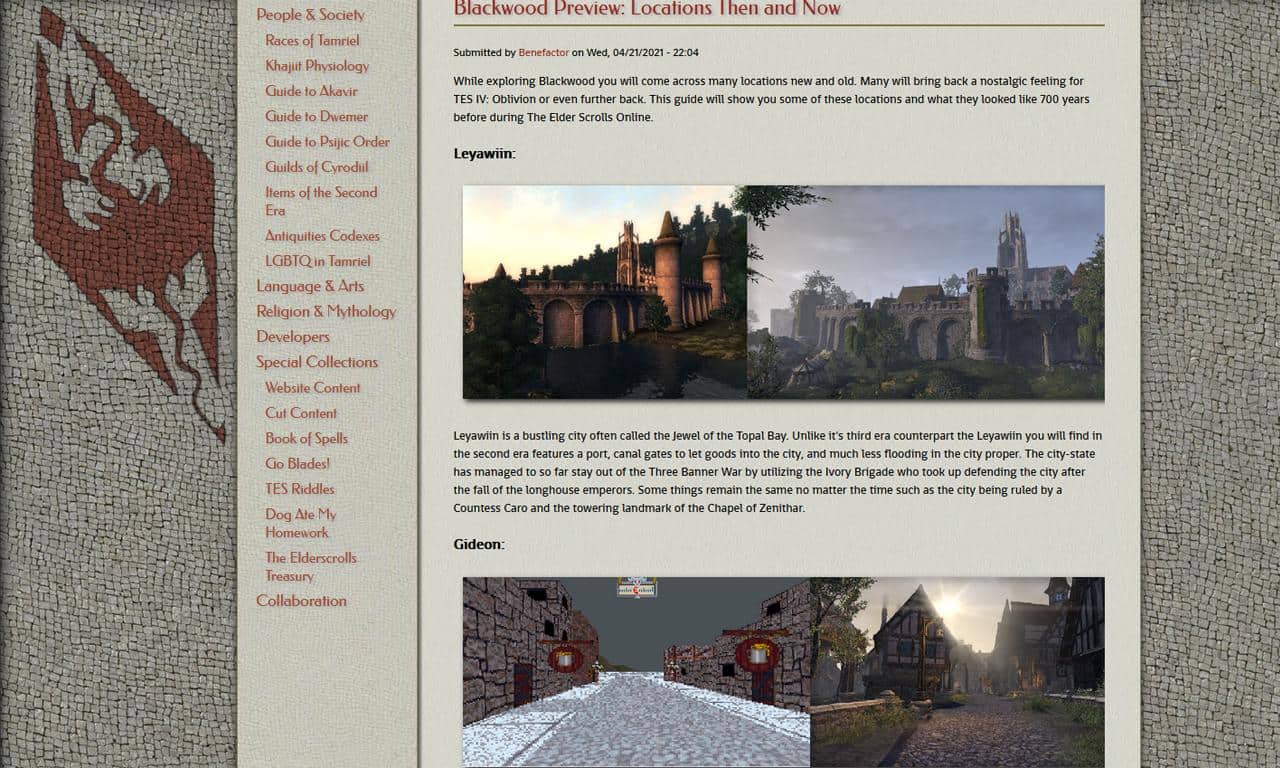 Are there any unique parts of the site that the #ESOFam might find especially useful?

Our site is one of the few places online that you can read the full text of the Emperor's Guide to Tamriel, as well as other out-of-game books published alongside ESO, such as Naryu's Journal or the Alinor Codex. We also have a repository of developer quotes and interviews that help give insight into the lore.

Are there any big plans for any new features or additions to the site?

We're always working on more things in the background, but don't like to announce them before they're ready. Benefactor's most recent project has been to locate and document early 2000s posts from Bethesda devs. Lady N is putting the finishing touches on a repository of all dialog and text files from every game, pulled straight from the engine.

What do you think it is that makes the Elder Scrolls lore so unique and interesting to its fans?

TES lore is wonderfully vast and purposefully ambiguous. Where other media have a prescribed "word of god" stance to their worlds (canon/Legends in Star Wars, for example), Elder Scrolls lore is written from the perspective of its unreliable Tamrielic narrators. Add on top of that 25+ years of development history across 4,000+ in-game books and many tens of thousands of lines of dialog and supplementary media, and you've built yourself a world that not only allows for the player's interpretation, but relies upon it.

Former Loremaster Lawrence Schick said it well: "[You] don’t need endorsement or validation ... to add to the lore of the Elder Scrolls. As long as you do your homework … and follow the rule of subjectivity, anything you decide to articulate is legitimate and within the Elder Scrolls approach to mythohistory, which embraces contributions from all different points of view. Canon is a figment; in the Elder Scrolls, if it seems right, it is right." 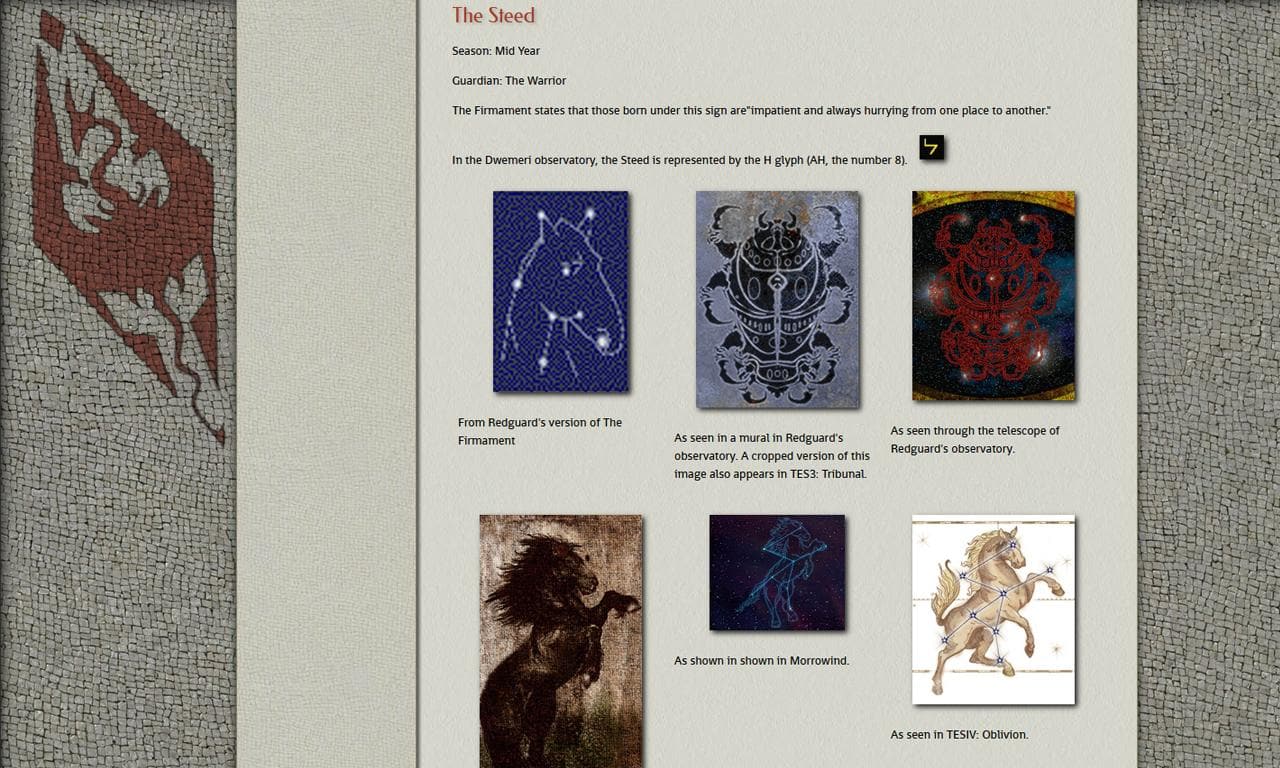 Do you have any recommended reading for players about to start their Gates of Oblivion adventures?

Where can Elder Scrolls fans go to learn more and join the Imperial Library community?

The Imperial Library can be found at www.imperial-library.info . We also have an active Discord where our community can discuss the lore together, as well as a Twitter and Facebook page.