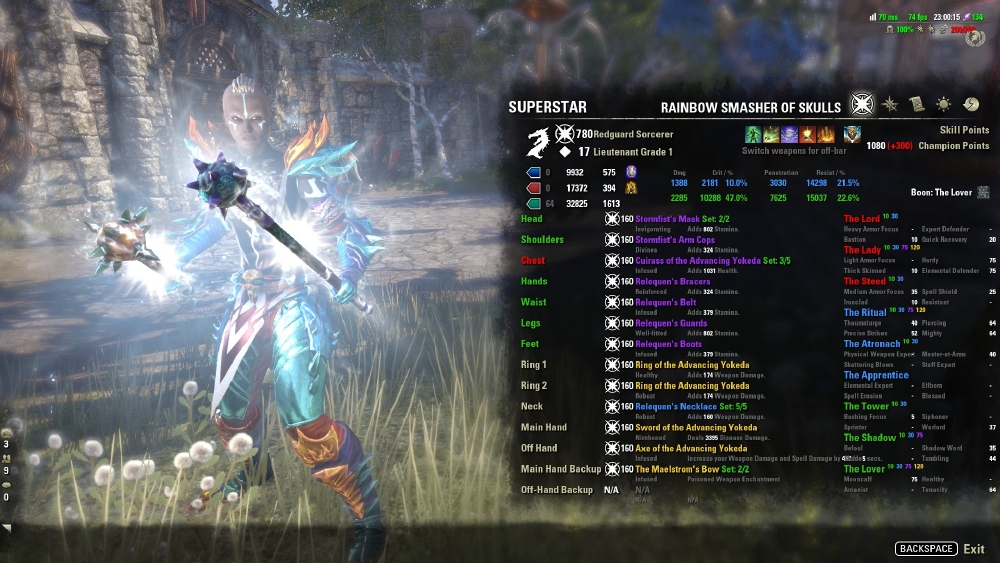 You can see the specifics of my setup in the screenshot, but here's a breakdown for more explanation.

Relequen is a very powerful stamina based set and adds a lot of damage by itself. It's best to use on armour/jewellery pieces to get as high an uptime on the proc as possible. The whirlwind it produces (it has a whirlwind!) is melee damage so it provides an easy way of getting a high uptime for the other set (Advancing Yokeda). Advancing Yokeda has a 5 second length on the proc so it works well on the front-bar only (I aim to spend less than 5 seconds on my back bar to keep the proc up). It's also a heavy armour set so I use it on my weapons and jewellery (one body piece would also work). I use Stormfist as my monster helmet, which is slightly lower damage than Selene, but helps out with sustain and still does a reasonable amount of damage due to sorcerer passives boosting physical and shock damage. Maelstrom bow boosts endless hail.


Traits
[/color]
My jewellery is one healthy, one robust and one infused. Infused for the extra weapon damage, robust to make sure my stamina pool isn't too low (because my sets don't provide very much maximum stamina) and healthy because I'm aiming for 17k health and it saved some transmute gems. Armour is a mixture of the best traits I could find but would ideally be infused on large pieces and divines on small pieces, or all divines. I have one heavy piece and six medium for slightly larger health and stamina pools (and because I panic and feel squishy without at least one heavy piece), with one health enchantment and the rest stamina. My main hand duel wield weapon is nirnhoned and off-hand is infused because nirnhoned is useful on the main hand for extra aoe potential, whereas nirnhoned is much less powerful on the off-hand so infused gives a nice boost instead. I use a poison enchantment on my back bar because it has the highest uptime due to poison arrow and endless hail. I use a weapon damage enchantment on my off-hand because it only needs to be procced once every 5 seconds and I use disease on my main hand as the next best dps enchantment. Absorb stamina is a good alternative if you struggle for resources, particularly with the change to physical damage in Murkmire. Ideally I would use two daggers or a dagger and axe rather than axe and sword, but that's what I had available (and farming is too frustrating).


Skills and Rotation
[/color]
Crushing weapon is a good spammable because it's cheap and provides a reasonable amount of healing so combined with the resistances from hurricane I don't necessarily need to run blade cloak (plus it's bright green and makes a cool noise). I keep vigor on my back bar as a panic button. Flawless dawnbreaker and rearming trap are on the front bar for the passive weapon damage. Ballista and the Greater Storm Atronach have similar single target dps potential while solo, but the storm atro has the added bonus of more group utility because an ally can activate the synergy for a major beserk buff (which handily boosts the damage of the atro too).

My rotation is (LA= Light attack):

After the first rotation I use storm atro when it's up and heavy attack into hurricane either as the first or last skill on my dual wield bar depending on how long it has left. I'm a redguard to help with sustain but I still find the heavy attack every 2 out of 3 rotations very useful. 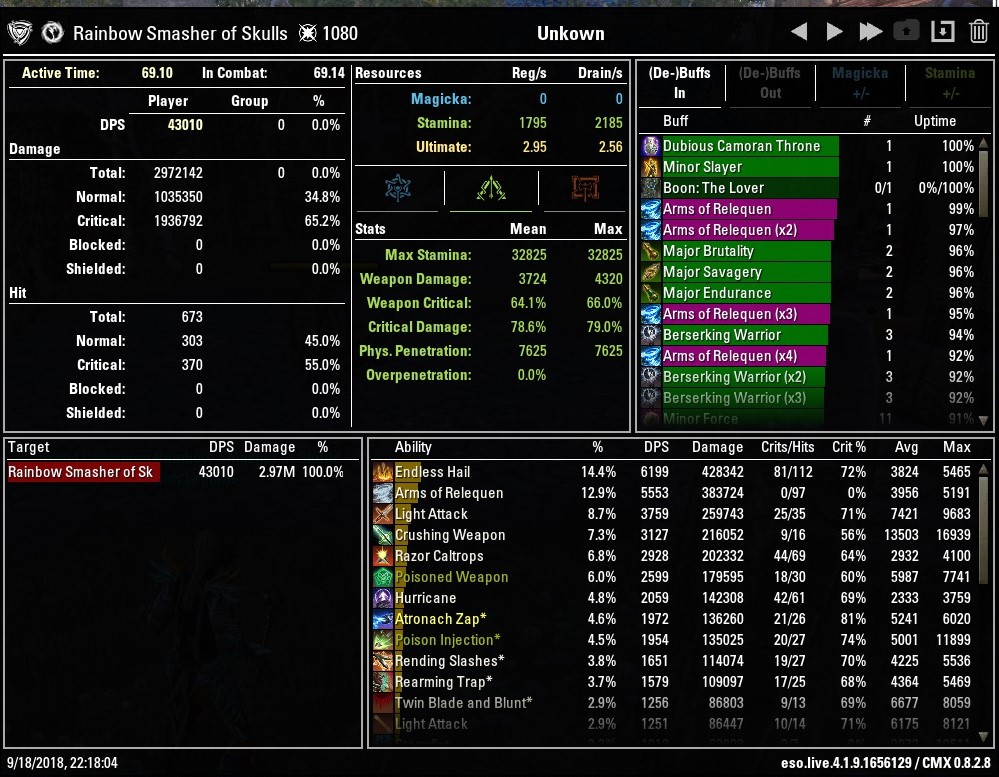 If you have any questions/comments/criticisms please let me know

PvE Stamina Sorcerer (Rainbow Smasher of Skulls) #118724
Thank you for sharing this, Bear keeper! Can I ask you about your champion points distribution at a lower cp level (i.e 300)?
Also, Waht you would suggest me in replaceing Crush Weapon?

One thing to check is that you always have a round number for the percentage increase because it rounds down to the nearest whole number and any additional cp isn't useful (e.g. 12.3% will be rounded down to 12%, so it's more efficient to only points in up to 12.0%). However, while you're still gaining cp it's not too much of an issue if you don't stick to whole numbers, because you're regularly putting in more cp anyway.

If you don't have access to Summerset, shrouded daggers (base skill hidden blade) from the duel wield line is a good alternative to crushing weapon.

So I have a Naga and time delay set to no delay yet with my stamsorc or magsorc I'm lucky to hit 27-30k dps. I know vids are on YouTube etc but when you do rotation are you block cancelling some of the skills and what mouse do you use?

If you do a video on the rotation would you be able to go a little more in depth? I'm not interested in being super sexy in trials but being a salty stick is frustrating!!!!

I know the rotation is listed down, so apologies if my post is covering trodden ground!!! I'm more interested how you click the buttons so quick and not miss skills and the block cancelling!!

Posts: 3008
Less More
Thank you received: 555
Topic Author
PvE Stamina Sorcerer (Rainbow Smasher of Skulls) #118785
This is a good a place as any to ask

I've added in a video for my rotation so you can see exactly how the rotation plays out in practice. It turns out I'm not very good at talking in videos quickly enough to explain the rotation while doing it, so hopefully the explanation here will be enough.

), so I only have a few spare buttons on my mouse and use them primarily for weapon swap and push to talk, which leaves my main skills to the num pad on the keyboard.

I don't block cancel on my stam sorc- I've tried it in the past on my bow bar and tend to find that it's simpler and smoother for me to let the animations play out rather than fumble through block cancelling. It's worth pointing out that I'm not the most amazing player when it comes to animation cancelling and weaving, so it's entirely possible that thoroughly practising block cancelling will get better results for you

Personally, my focus for weaving is to always hit the light attack in between all skills on my duel wield bar because they add a lot of extra damage there and it's a waste of crushing weapon if a couple are missed in a row. I'm less bothered about missing occasional light attacks on my bow bar because I prioritise getting the skills off smoothly so I can quickly return to my front bar. Most of my stats are higher on the front bar so the less time on the back bar the better, but light attacks are still useful for the hawk eye passive if you can get them in.

For animation cancelling, I always cancel the last skill before I weapon swap (e.g. poison arrow on my back bar). This is partly because it means the first hit of poison arrow lands while I'm on my front bar, so it does slightly more damage, but also because it's a good way to cut down the time completing animations without having to add in extra button clicks like with block cancelling. I also aim to animation cancel all my light attacks to save time, and queue up a skill to use after a heavy attack (always hurricane in the case of this rotation).

The main thing for me to build up to pressing buttons quickly was to practice really really slowly- I built up my rotations one step at a time by forcing myself to hit a light attack between each skill and weapon swapping in the right places. The damage was terrrible because I was doing it so slowly, but the aim was to get the muscle memory in place. I also practised animation cancelling with weapon swap, and animation cancelling light attacks with skills one skill at a time to make sure I had the hang of each element of weaving and animation cancelling before I added them all together. Putting weapon swap on my mouse was one of the biggest improvements for me to help the rotation flow and I like to think that having a proper left handed MMO mouse would help me hit significantly higher dps numbers, but I have absolutely no evidence to back that up other than vain hope

It's not the most exciting answer I'm afraid, but practice really is the key to efficient weaving and a smooth rotation

If I practised more I might be able to give you a better answer about block cancelling...

Thanks for the in depth answer to my post, it's very much appreciated that you took the time to answer.

I'm not desperate to be a min-max player, but more a player who can contribute to a team effort. Main reason why I've avoided harder dungeons is because of this reason... I shall get my pointy sticks out as soon as possible and endeavour to practice my skills and drills!!!

Once again thanks for the answer.

Posts: 3008
Less More
Thank you received: 555
Topic Author
PvE Stamina Sorcerer (Rainbow Smasher of Skulls) #118797
No problem, this is a topic I'm very happy to talk about- the hard part is finding people interested in listening

One thing to bear in my mind is that you definitely don't need higher dps than the 27-30k you mentioned to be able to complete harder dungeons (in fact you don't even necessarily need that much). It's just that you have to pay a lot more attention to playing the mechanics cleanly and for longer if you have lower dps, so the more dps you have the simpler the fights. Personally I enjoy theory-crafting and min-maxing so that's my preferred route, but it's still entirely possible to contribute to a group and be successful by thoroughly learning mechanics instead.

So really it 's best to find a balance between being comfortable with your rotation and making the most of enjoying the content- if you're getting fed up of practising dps then it's probably better to head out and try the dungeons instead, since getting a feel for the dungeons will be just as useful in the long run as higher dps